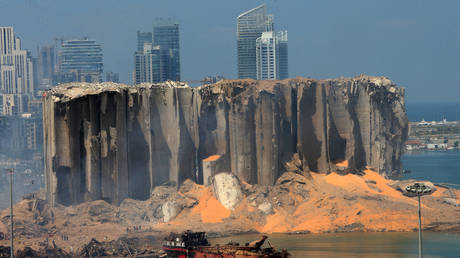 After a colossal port explosion rocked the capital city of Beirut, the Lebanese government has decided to put all officials who oversaw storage and security there since 2014 under house arrest, until investigations are complete.

The country’s Information Minister Manal Abdelsamad said the military will oversee their confinement, until all those responsible among the suspects are found. The port officials will be put under arrest “as soon as possible,” according to Abdelsamad, and the whole procedure is expected to be finished “within the next five days.” It is unclear as yet how many people are going to be arrested.The investigation is being conducted by a special committee headed by the justice minister and includes Prime Minister Hassan Diab and the heads of major security agencies.

Ticking time bomb? Explosive stash that devastated Beirut was there since 2014, PM says, vowing to punish those responsible

Diab has previously said that the explosion likely occurred due to the 2,750 tons of ammonium nitrate which had been improperly stored in a port warehouse.An open-source intelligence-gathering group, Aurora Intel, claims to have found a picture of the warehouse before the explosion. The unverified images show a thick pile of dirty containers labeled “Nitroprill HD.”The bags say “NITROPRILL HD,” which may be a knock-off of Nitropril made by Orica.Orica sets the TNT equivalence for fire at 15 percent. .15 x 2750 = 412.5One more data point that suggests the explosion was a few hundred tons. https://t.co/ucuHdpazm3— Jeffrey Lewis (@ArmsControlWonk) August 4, 2020The port’s newsletter also seems to confirm that a ship with 2,750 tons of Ammonium Nitrate had entered Beirut in 2013. Lebanese media reported this exact amount of highly explosive chemical was held in Beirut’s port for six years, having being seized from an abandoned ship.Sep 13: a vessel with 2,750 tons of Ammonium Nitrate entered the Beirut port.Oct 15: “the port authorities discharged the cargo onto the port’s warehouses. The vessel and cargo remain to date in port awaiting auctioning and/or proper disposal.” pic.twitter.com/TNLeRvMkXP— Hachem Yassine (@HachemYassin) August 4, 2020In the aftermath of the incident, Diab promised that those responsible for the explosion would “pay the price.” The explosion killed at least 135 people, injured more than 4,000 and left 300,000 homeless.Think your friends would be interested? Share this story!